13th September 2015; and as we rush out the door, hands full with bags, race entry forms and children, we are greeted by a still and overcast day.

Late as usual we drive positively toward the small picturesque village of Swineshead in Bedfordshire, in the hope of arriving before the crack of the starting gun at 11:30am. 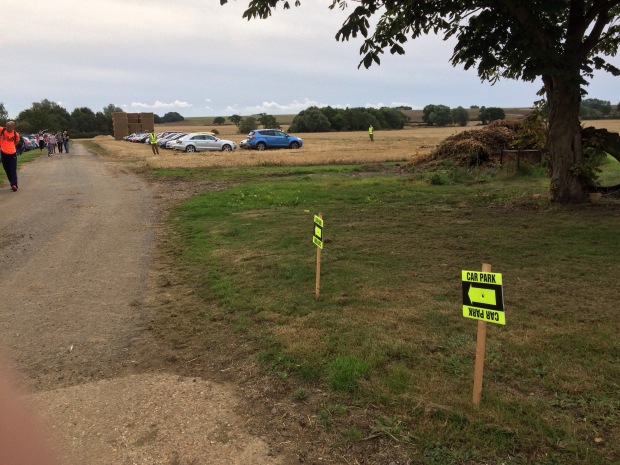 Located just off the A1 it is pretty easy to navigate to our destination and we are seamlessly guided into a farm car park by some local cadets, doing their utmost to maintain a cool persona in their freshly pressed camo get up. Thankfully, a teammate has already arrived, trying his hardest to encourage the cadets to guide drivers using the less than cool ‘windmill motion’ of the arms.

10 miles of RunBritain accredited road is one the agenda for the adults at a selling price of £13 (£11 pre-booked), with the added fun factor that the 3 mile marker must be reached by the 35th minute else a shortened 5 mile course will be enforced. A palpable anxiety grips the more methodical runner, however it will transpire that none shall be swept up today.

Lower down the height chart, a 3k road and trail fun run is set out for the kiddies, their pocket money reduced by £4.50 (£3 pre-booked) as a result.

At the starting line, oddly, the 10 mile and the fun run start simultaneously, albeit the fun run is located behind the main event, and as soon as the starting gun is fired, us spectators are treated to a wild scramble as children dodge around, under and over the afore-mentioned methodical runners in order to find their rhythm.

The sounds of tutting adults mixed with the odd squeal of surprise warms my soul with mischievous delight… However despite my pleasure, this was clearly not a good idea. Nor is that of the organisers to post minimal marshals on the fun run course, leaving at least one spirited girl question whether she had ventured off piste

12 minutes gone, and the first young ‘un crosses the line followed, by a consistent sprinkling of kids for the next 10 minutes or so, with ‘The Daughter’ crossing the line in 7th place, pleased with her time on what she would describe as a “cool lumpy road and grass course”.

On to the adults and it’s a lonely race, run atop freshly laid gravel roads that could bring tears to the eye of the most seasoned knee grazer. We spectators (my pesky shin) vow to hobble and squirm toward the 9 mile marker, armed with a bright green flag, tinnitus inducing whistle and small loud person (afore-mentioned ‘The Daughter’) to gee up runners in their last mile of need. It seems to work as we are greeted with weary smiles from almost each and every runner as we clap, cheer, wave and whistle our way to deafness.

55 minutes, 45 seconds in and the leader Mr Williams of Notts Athletic Club, strides over the line. Thereafter our own club boasts 10 finishers, including Miss Overington who finishes 3rd lady with a time of 1:12:39 and ‘The Wifey’ who, running her first ever 10 miles (taking after my own bad idea #1) is pleased to clock in a time of 1:42:06.

Back at the finish line the village church hall is equipped with cakes, a bbq, book stall and a bar where our noisy club sits in anticipation of a prize giving. An hour later the abacus clicks its last clack and a seasoned race director commences his blurb with the fun run results.

It transpires that official times are only recorded for the first three small people, much to the dismay of ‘The Daughter’. Thereafter 1st three males are announced, followed quickly by the first three females, with Miss Overington placed third and now the proud owner of a bottle of a bottle of plonk strong enough to strip wallpaper.

All in all, not a bad day, with some cracking prizes for top 3 winners, a chance to improve on a RunBritain ranking, all set in a picturesque village located much closer than Newcastle (where Mr Farah, Mr Weir and Miss Woods all secure solid victories).

Swineshead organisers should rethink about the race start, where they are better off allowing the 3k to start ten minutes earlier than the main event (which wouldn’t materially interfere with road closure timings) to prevent a repeat of the amusing panic and jostling witnessed today. Also, not giving official times for the juniors is a poor show, particularly due to the relatively small field of 3k runners. However rest assured that these blips will not prevent us whistle toting, flag waving hooligans from revisiting a road race featuring loose chippings, boozy prizes and cheap cake which did well to compete for attention with the iconic Great North Run…